Originally from rural Louisiana, Dan Grissom has been designing, painting, print-making and making music out of his garage in Austin for many years, completing celebrated posters for artists ranging from John Prine to Metallica, Salt-N-Pepa to “Weird” Al Yankovic. This October, for the third year in a row, Still Austin engaged Dan to create the label for our Monster Mash Distillery Reserve Series release. 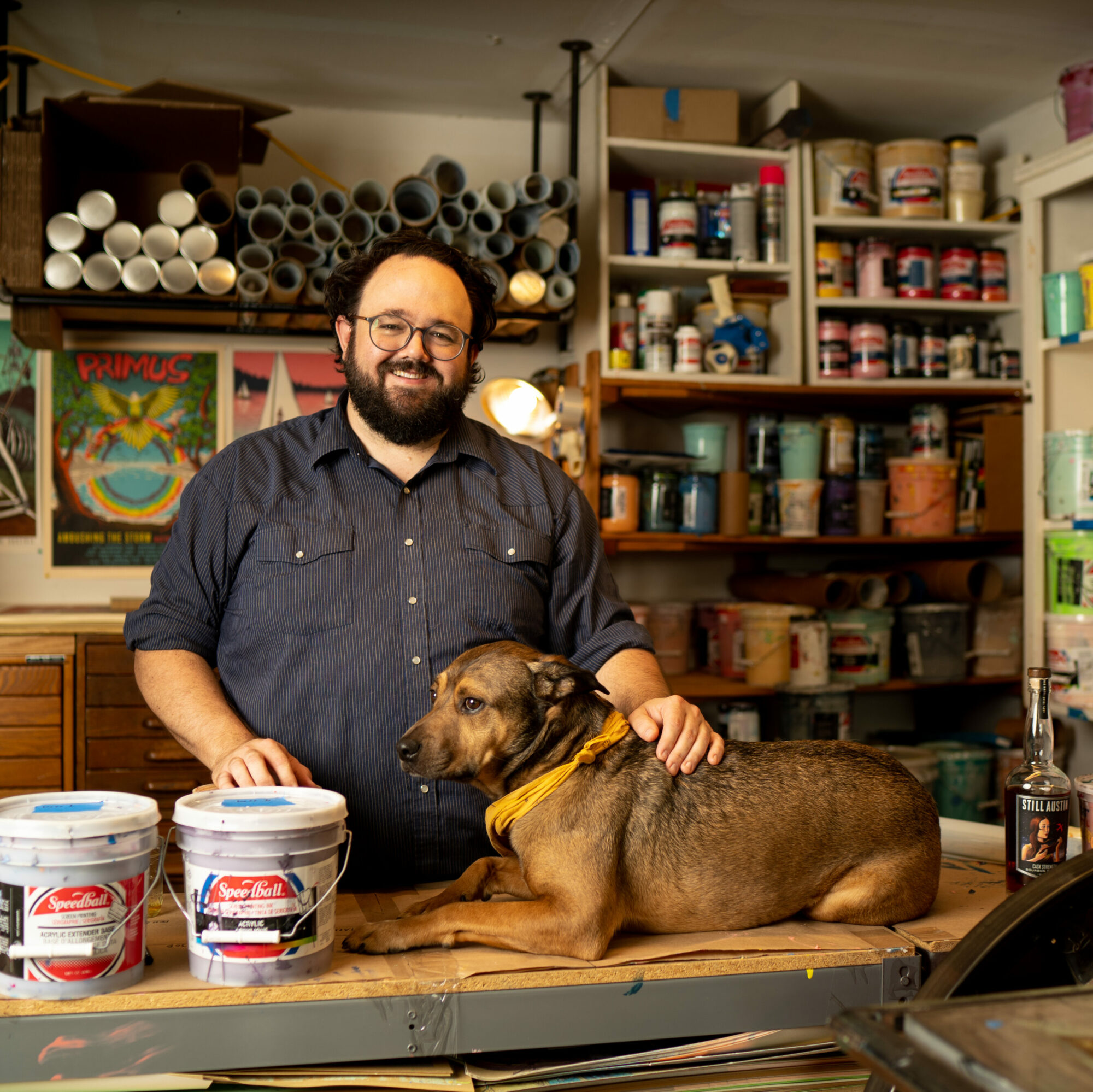 1. What gets your motor running?

I love the feeling of seeing a band or musician, or a piece of art that really surprises me. Not that it has to be something wild to surprise me, but there’s a lot of mediocre music and art out there. So when I see someone that makes me want to really pay attention and leaves me wanting more, it gets my creative juices flowing and makes me want to create something.

2. Tell us about a work of art you feel is woefully misunderstood or underappreciated.”

This is a tricky one. I’m going to go with the Bob Dylan album Fallen Angels from 2016. It’s one of his albums of classic American standard songs, mostly from Frank Sinatra’s catalogue. He did a few of those around that time, and this is my favorite one. I think a lot of people thought he was kind of wasting his time with all these Sinatra covers instead of working on new original material, but I think his voice sounds surprisingly great in this style. It’s one of my go-to albums to put on the turntable for a relaxing Sunday afternoon.

3. Did you always want to be an artist? When did you know you wanted to do this for a living?

Pretty much. I’ve drawn and painted since I was very young, and I always thought it would be great to figure out a way for this to be my job. So I studied graphic design initially because that seemed like a more tenable path. I worked as a graphic designer after college, then in a few print shops doing letterpress and screen printing. A little over five years ago, I slowly made the transition to being fully self-employed, which is a mix of very stressful and completely amazing and freeing.

4. In addition to screen printing, you also work with a 1949 Kluge open-face letterpress. What is it about old-school analog machines and techniques that appeal to you?

I’ve always loved old machinery. My dad fixes up old trucks, so maybe some of that comes from him. When I started studying printmaking, I was enamored with all the old equipment, especially the letterpress stuff. The Kluge open-face press is one of two from around that year in my shop. The other belongs to my friend Lindsey Verrill, and it’s a flatbed Vandercook Universal 3. She uses it to print posters with old wooden type. There’s a quality you get from that method of printing that’s hard to quantify. Every print is a little different, and the presses are often moody and have a personality of their own. Screen printing is also a very old analog process that can be equally temperamental. But, once you learn to wrangle these machines and techniques, you can get some great results that can’t be replicated very convincingly with modern methods.

5. You’re also a musician! How does your music influence your art?

As a songwriter, and particularly as a lyricist, I’ve always enjoyed the element of storytelling. I often think of my illustrations in a similar way, almost as a scene from the middle of a movie that’s playing in my head. Sometimes I’ll be sketching out a drawing and it seems too static, but by adding an animal or something a little unexpected to the scene, suddenly there’s the potential for a story there. For example, if I draw an old rusted out truck … that’s nice. It’s a nice drawing of an old truck. But if I draw a wolf standing on top of that old truck, suddenly there’s a story there. What’s that wolf doing on that truck? Does it live in the truck? Is it guarding the truck? Or maybe it’s something even more subtle like adding some bullet holes in the side of the truck. I think the drawing can have more depth that way because I can add some little clues like that, but the viewer can create the backstory on their own. That’s what’s been fun about this series of Monster Mash whiskey labels I’ve been creating for Still Austin. I can create these scenes and add little details to make them tell a story, even in just a single image.

6. What advice would you give to a young person who’s thinking of pursuing a career in art, but is scared they won’t be able to succeed?

If you want to be a self-employed artist, stay out of debt as much as possible. Or, get out of debt before you make the jump. The transition is so much easier if your monthly bills are as low as possible. It’s very difficult to succeed in a career in art, especially if it isn’t client-driven in some way. My income is split between creating and selling my own work, doing freelance illustration, and occasionally printing for other artists. That versatility has served me well. But also, maybe being self-employed isn’t for you. I have plenty of friends who I would say have a very successful career in art, and they create truly amazing work, but they prefer having a day job to pay the bills so their art can be more open and free. I do think it’s important to take a serious look at the art you want to make. [Think about] its relationship to money, so you can set more realistic expectations. Not all great art is easily monetizable.

7. How do you take your whiskey?

Straight, with one ice cube.